Compressed air can advantageously be used in industry to move objects, either forward in the production process or, for example, to separate objects from each other. It can also be used to guide the product in the correct position. A big advantage of compressed air is that it does not need mechanical contact.

Transporting covers on a conveyor

The air nozzle SILVENT MJ4-QS is easily mounted on the existing 4mm open pipe. The installation makes it possible to reduce energy consumption and also lower the sound level. A blowing application like this, with consistent flow, means the installation of an air nozzle makes a big cost reduction difference. 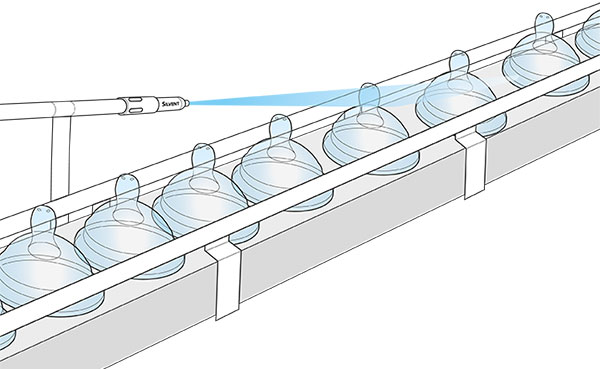 The air flow from the SILVENT 705 L air nozzle separates the aluminum sheets to ensure that the suction cups only lift one sheet at a time. If the sheets are not separated, there is a big risk that several sheets will be picked up at the same time, which creates problems later in the production process. The air nozzle thereby facilitates production and reduces the number of rejected products. 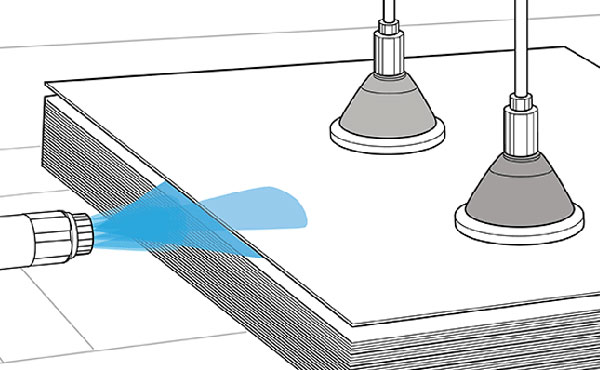 Industry: Textile and leather
The company used blowing with compressed air to convey leather in the impregnation process. An air ramp of their own design using drilled holes was installed to perform the work. The existing solution was energy-intensive and caused pressure-drop problems, which affected the efficiency of the entire production.

Solution
The custom SILVENT 300 air knife was designed by Silvent engineers to optimize the application. By adapting the blowing force, blowing pattern, blowing distance and blowing angle to suit the application, energy consumption and the sound level in production were both reduced. It was thus possible to improve conveying both in terms of economics and the work environment.

Result
To reduce energy consumption and ensure a consistent blowing force, a Silvent custom air knife was installed. The air knife reduced turbulence, thus allowing the use of more of the air supply for efficient blowing. By using less air, it was also possible to rectify the pressure-drop problem, and this had a positive effect on other parts of production. In addition to energy savings, it was also possible to reduce the sound level in production.

Conveying wallpaper in a machine

Industry: Printing
The company used an air ramp of its own design to move wallpaper forward through the manufacturing process. When guiding the wallpaper, it was important that it follow the roller to avoid problems and machine stoppages. Machine downtime due to production errors is both costly and inefficient.

Solution
The custom SILVENT 300 air knife was designed by Silvent engineers to render the application more efficient. The air knife’s blowing force, blowing pattern, blowing distance and blowing angle were customized for the application to make sure the wallpaper was blown down onto the roller. Installing the custom air knife reduced the problems in the manufacturing process.

Result
The installation of a Silvent air knife made it possible to improve wallpaper conveying. The air knife made sure the wallpaper was blown down onto the roller and guided along in the production process without any problems. This reduced the number of costly machine stoppages caused by torn paper. Thus, the company was able to work more efficiently.