Sorting with moving machine parts is common in industry. This entails a great risk of injury, which can advantageously be replaced by blowing with compressed air.

Sorting products on a conveyer

The SILVENT X07 air nozzle effectively removes deviating products from the conveyer. Since it does not require any mechanical movements, sorting can take place at a higher speed, which results in a more efficient production process. 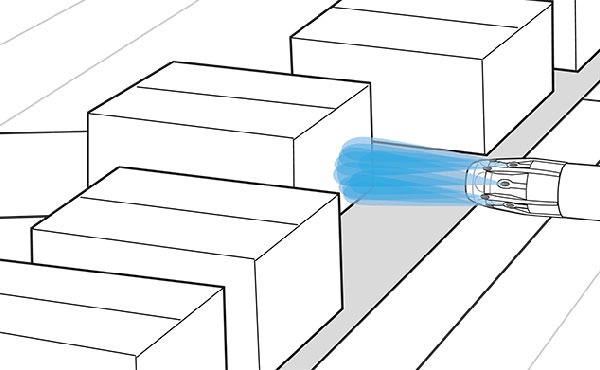 Removal of bottles with incorrect weight

Solution
Installing the SILVENT 971 F air nozzle reduced energy consumption and improved the performance of the application. The SILVENT 971 F air nozzle is fitted with flow control, which allowed the company to adjust the blowing force. Thus, the company was able to test regulate the blowing force until it was optimized for their particular application. This meant no more air than necessary was used, which reduced consumption and sound levels alike.

Result
To streamline the removal process and reduce the use of compressed air, the American company installed an air nozzle. The flat air nozzle provided a wider blowing pattern and thus a wider contact area, which made removing the bottles easier. The nozzle also used compressed air more efficiently than the open pipe, which allowed the same work to be done with lower compressed air consumption.

Sorting components into the required position in a vibrating feeder

Industry: Machine manufacturers
The company used compressed air to position the components correctly in the vibrating feeder. Blowing with compressed air was used at several places in the feeder to make sure the components were in the right position when they left it. They were using open pipe blowing equipment, which generates inefficient, turbulent flows and high sound levels.

Solution
The SILVENT X01 air nozzle provided a directed, concentrated jet that streamlined the component feed. Thanks to the unique technology of the air nozzle, it was also possible to reduce the sound level and use the compressed air more efficiently. This not only had a positive effect on production, but also improved the work environment for the operators.

Result
By installing an air nozzle that reduces turbulence, it was possible to lower the sound level when blowing with compressed air. The air nozzle also gave better blowing coverage, which helped when positioning the components, thus rendering the application more efficient.